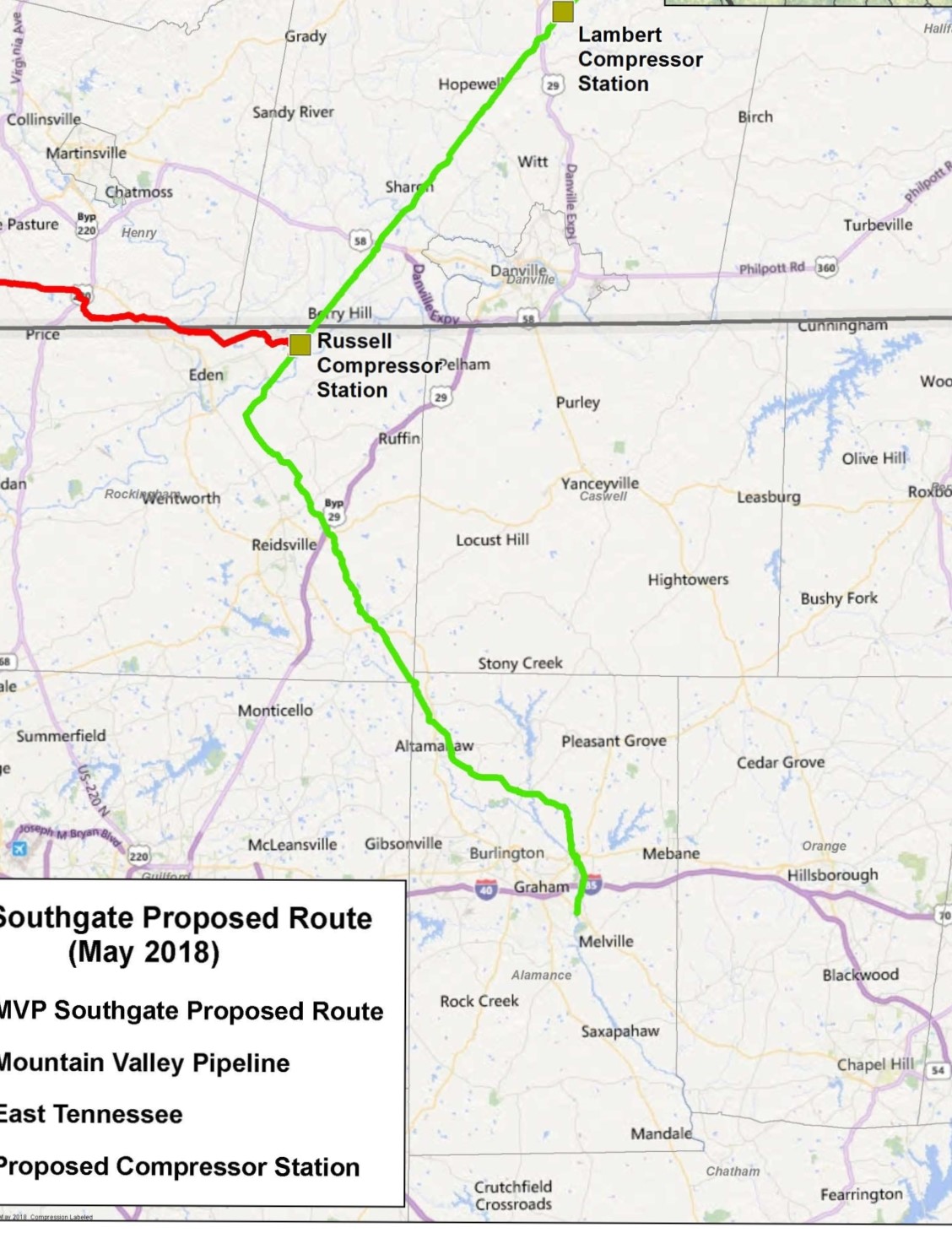 In their proposed plans for the Southgate extension, Mountain Valley Pipeline (MVP), LLC has announced two compressor stations to be built in Pittsylvania County (near Chatham) and in Rockingham County (near the state line between Eden and Danville). The purpose of these compressor stations according to MVP, LLC is to boost the pressure within the pipeline to so that natural gas can be carried from the starting point in Pittsylvania to the East Tennessee Pipeline and along to other purchasers like PSNC. Mountain Valley has reported they designed these compressor stations to raise gas pressure to 1,450 psi which is seemingly large for the length of the proposed route and is at the highest end of pressure for fracked-gas pipelines.

Mountain Valley plans to construct the Russell Compressor Station that will provide 11,150 horsepower of compression for the Southgate pipeline and will contain one gas-drive turbine. Mountain Valley has written that the station is expected to include the same buildings that the Lambert Compressor has planned. Currently, there is no secured land for the station where Mountain Valley can build upon and the land required for construction and operation has been reported by the corporation as “TBD”.

Fracking infrastructure poses serious exposure risks to those living nearby.

There is a proven record of fire and explosions at Compressor Stations across the country. An explosion at the Russell or Lambert compressor stations would be 615 feet in radius. This video is from the Falcon Natural Gas Compressor Station in Pinedale, Wyoming. On December 6th, 2011 it caught fire and exploded during a “normal venting operation.” An incident like this would require massive evacuations.

Most common COMPLAINTS of residents living near compressor stations:

VOCs, present at compressor station construction and operation, are a varied group of compounds which can range from having no known health effects to being highly toxic. Short-term exposure can cause:

According to a World Health Organization assessment of research, excessive noise can also increase risk of cognitive impairment in children, sleep disturbance, tinnitus, and high levels of annoyance.

A peer-reviewed article, Investigating Links Between Shale Gas Development And Health Impacts Through A Community Survey Project In Pennsylvania (2014) is one of the few publications that explicitly addresses health impacts from compressors. The report states: “In the Pennsylvania study, distance to industrial sites correlated with the prevalence of health symptoms. For example, when a gas well, compressor station, and/or impoundment pit were 1500-4000 feet away, 27 percent of participants reported throat irritation; this increased to 63 percent at 501-1500 feet and to 74 percent at less than 500 feet. At the farther distance, 37 percent reported sinus problems; this increased to 53 percent at the middle distance and 70 percent at the shortest distance. Severe headaches were reported by 30 percent of respondents at the farther distance, but by about 60 percent at the middle and short distances.”